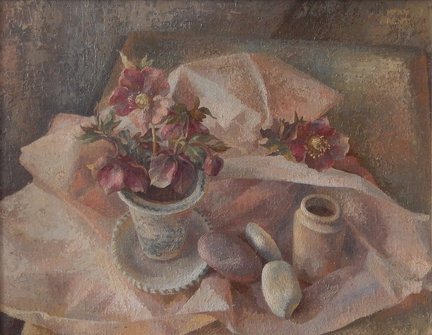 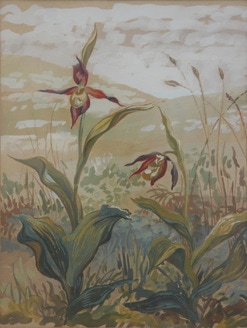 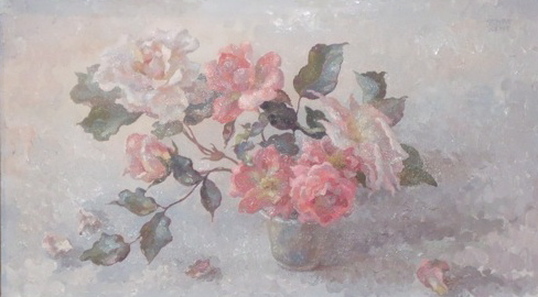 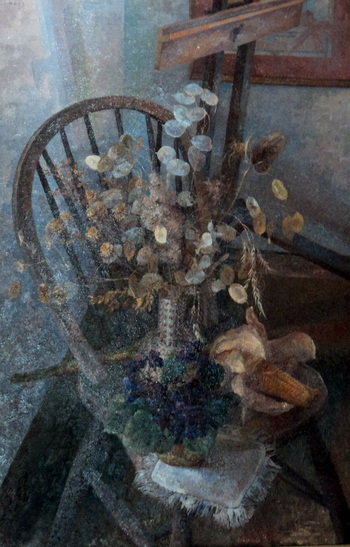 Dried Flowers and Spindle Back Chair (title to be confirmed)

The delicacy and texture of the dried flowers is beautifully observed and communicated with extraordinary skill and depth.

Dusky Cranesbill and Other Wild Flowers - 1976 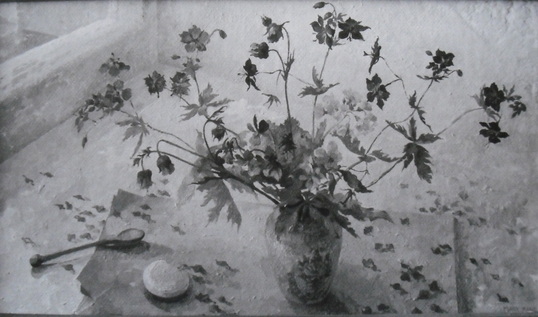 MKH took very great delight in the beauty of simple wild flowers observed during walks near the farmhouse. Their delicacy, fragility and impermanence making their portrayal especially difficult but ultimately rewarding.

Already the petals are dropping. Hurry - tomorrow they will probably all be gone. 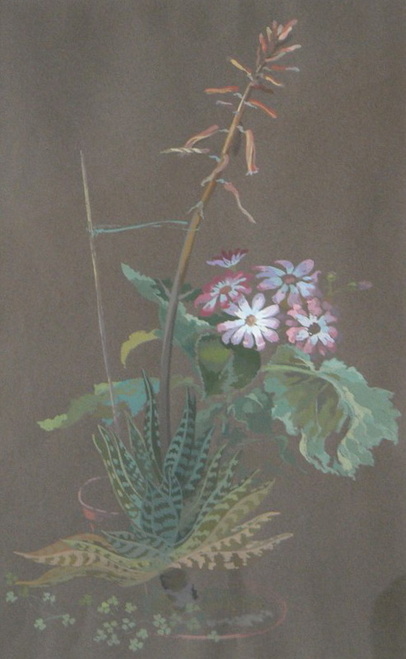 Harebells (title and date to be confirmed) 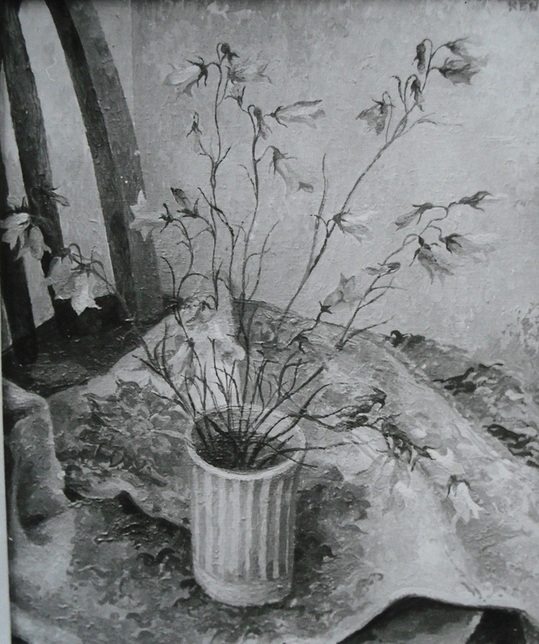 One of several paintings of Harebells, one of her favourite wild flowers. The beautiful pale blue of their flowers is sadly unavailable in this black and white photograph. Their indefatigable struggle for life amongst tall and strangling grasses is conveyed in the sharp vibrancy and twists and turns of their stems. Their beauty heightened by their isolation here in the striped cup of water on the chair..

Harebells and other wild flowers (Title and date to be confirmed) 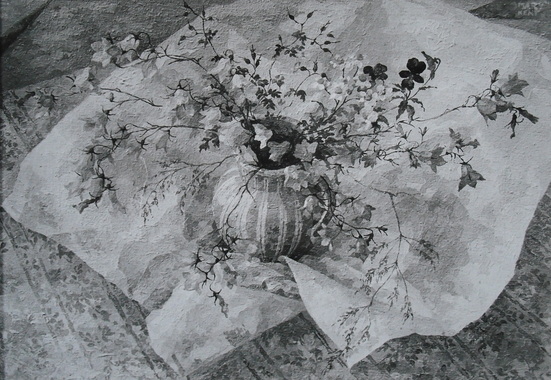 Harebells and other wild flowers (Title and date to be confirmed) 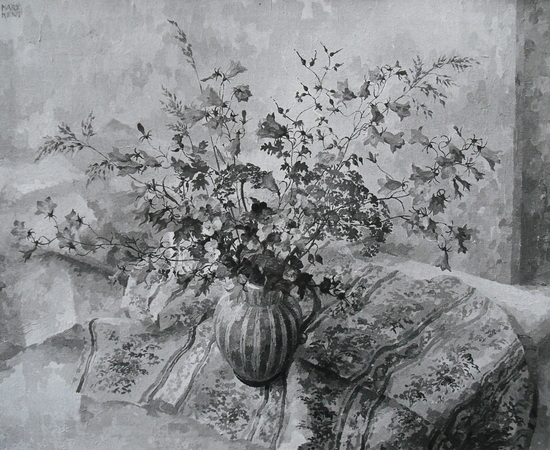 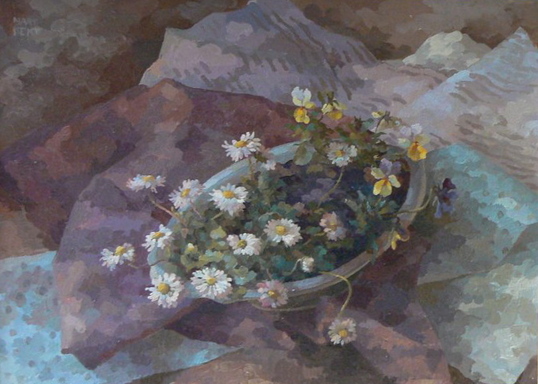 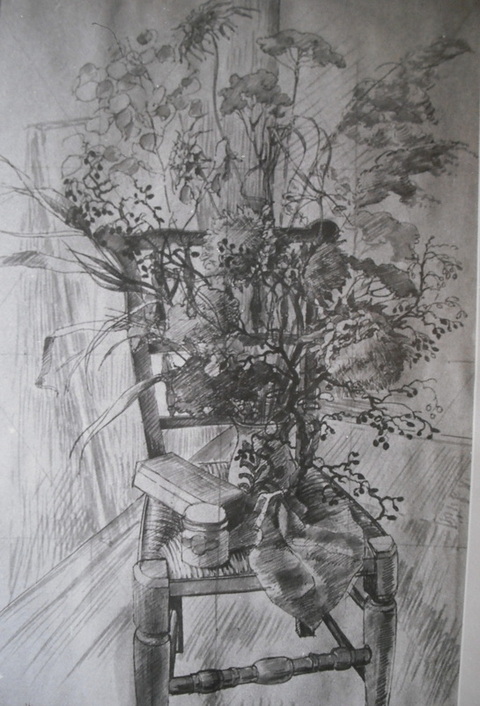 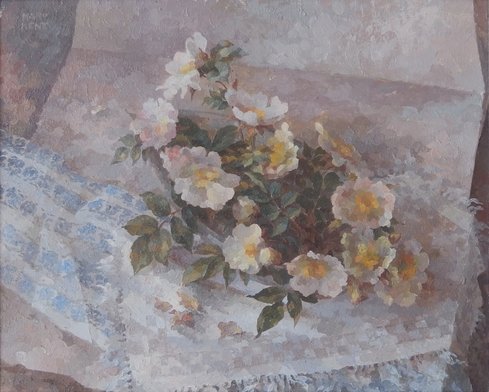 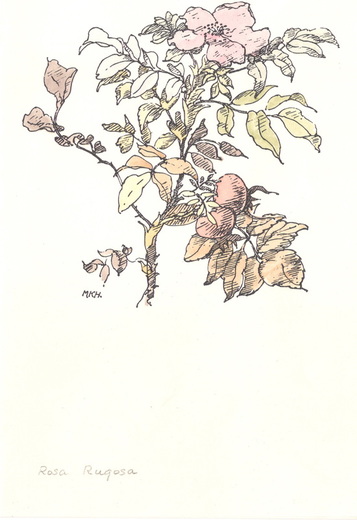 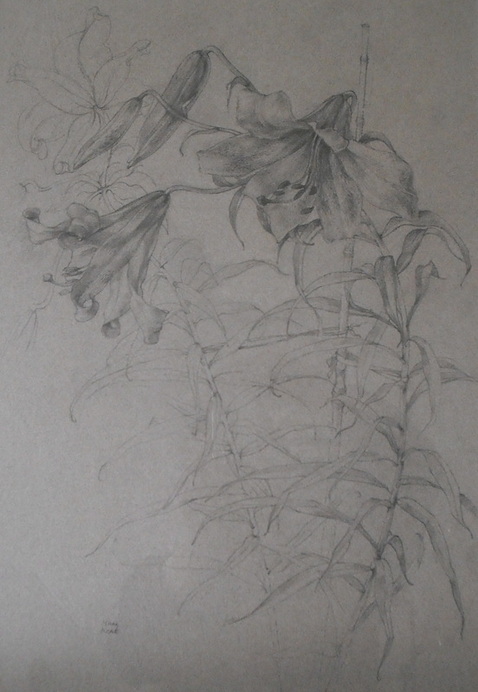 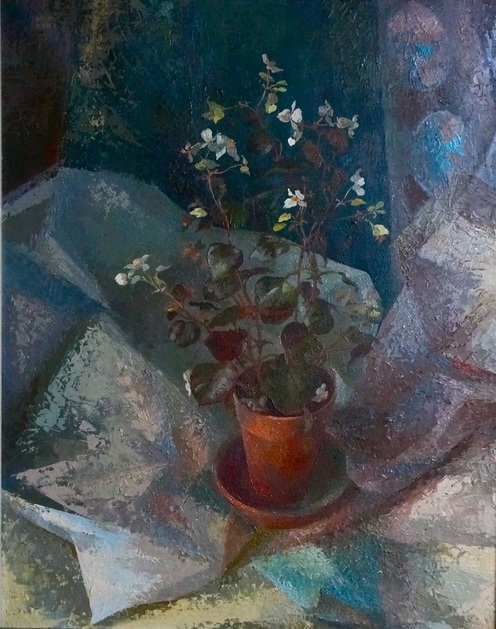 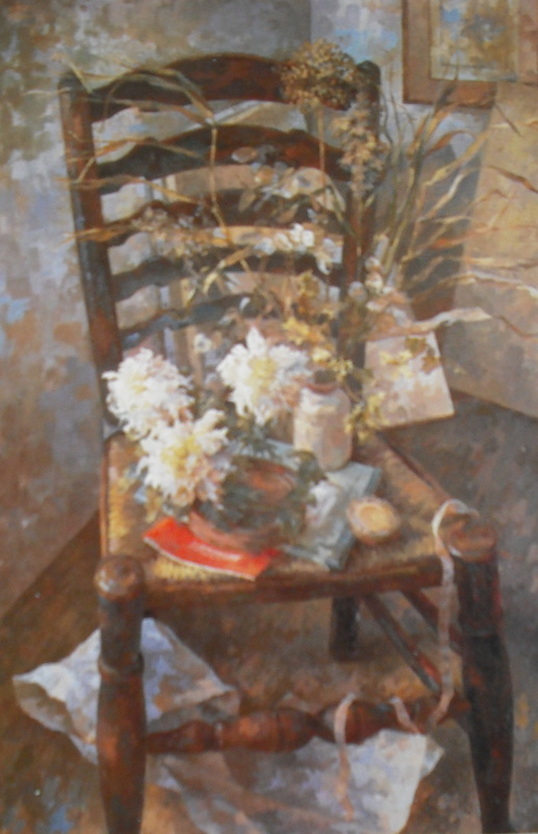 It is hoped that a less blurry reproduction of this painting will be found. 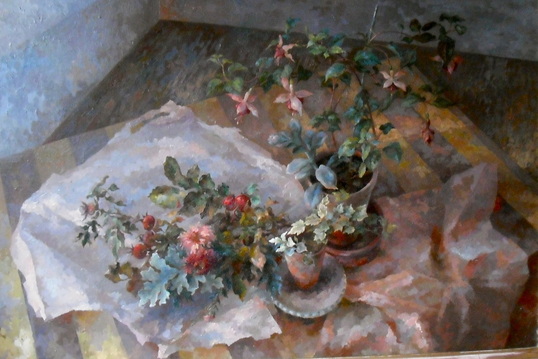 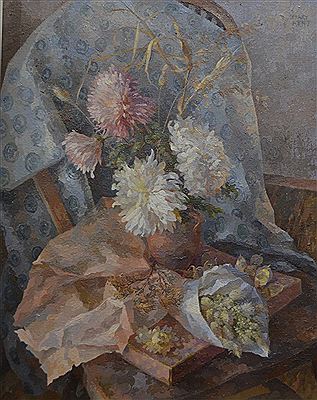 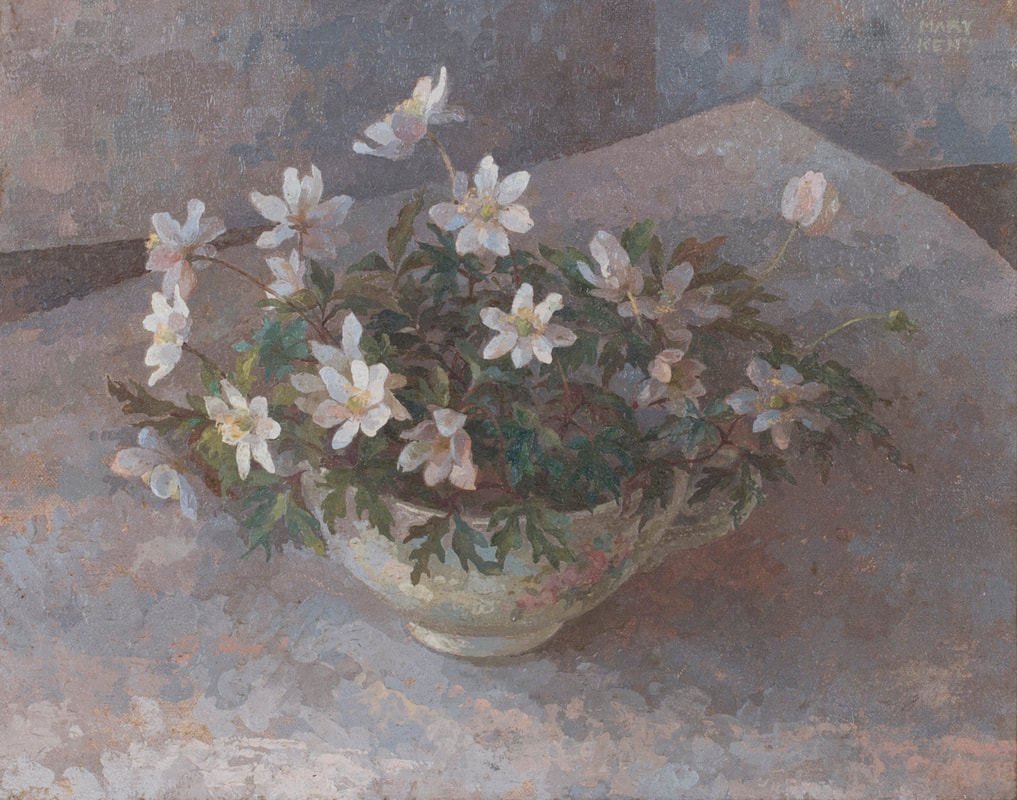 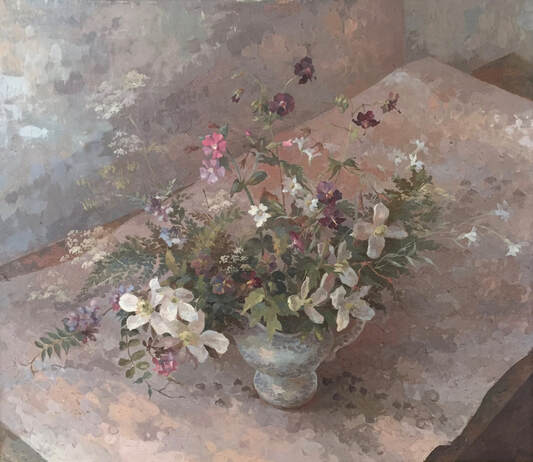 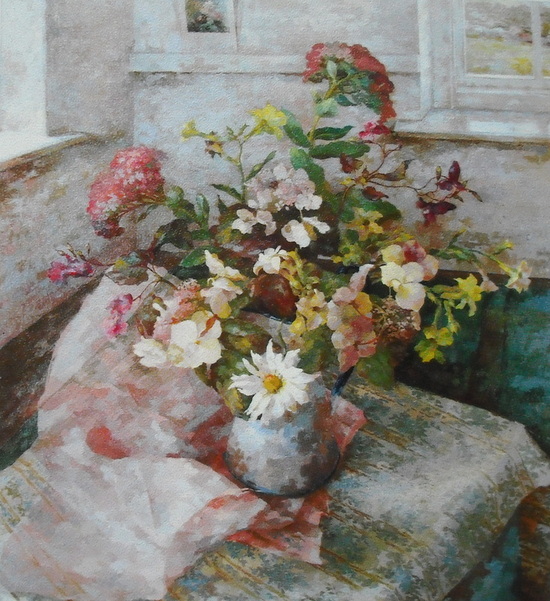 Exhibited R.B.A, 1982.
Hunting Group Exhibition, 1983.
Painted during the penultimate year of her life and an example of her late work. Complete command of her media communicates the beauty of her beloved garden flowers in transcendent glory.
Her landscape oil paintings were worked up in the studio from sketches done in situ but with the still life paintings she was able to have the subject in front of her. Naturally, the flowers would have evolved and changed as they grew from day to day in the studio, and the information presented to her by their physical presence would remain infinite. To paint like this one really has to know what one is doing - and she certainly did. There are thousands of decisions to be made from the looking at the infinite subtlelty of the actual flowers in front of her. Warm and cool, light and dark, sharp and soft, range and depth of colour, light, focus, what to make strong, what to make less important,  delicacy, weight, - etc etc. To take all this on is a highly complex operation demanding great skill, concentration and hard work. It is not about the ego of the artist, not about giving an impression achieved at some extent by chance and touch - it is instead a sense of humility that MKH is involved in. It could be that the creation of this highly complex matter in a way that reaches a satisfactory stasis and order is in itself a mirror of the thought processes in her mind. To see so much, to be able to accept so much, to entertain so much, to order so much and to reflect so much is surely a mirror of thought processes that must have gone on internally about everything else in her experience too. Free from the sometimes inadequacy of verbal language as a form of expression, this is a different kind of shared conversation with her and what she experiences as she encounters visual reality. This depth of vision, this seeing and holding is perhaps an expression of the range of her experience of life and existence. It is a celebration of life, the unbelievable beauty to be experienced along with the desperate sadnesses - a heaven on earth.
Her technique is not like gardening, where what is planted is enhanced by chance reactions to such elements as wind, rain or sunlight. Here everything is controlled. It is expression of self control, an expression of understanding and of depth and sensitivity of perception and of complex interrelationships. It is a reflection of the relationships of human psychology. So why this discipline and control? This growing power to create this virtual reality. Was there not enough already in her life? Lives as fragile as flowers - and so what is created is this new reality, at last a virtual reality where she had power. 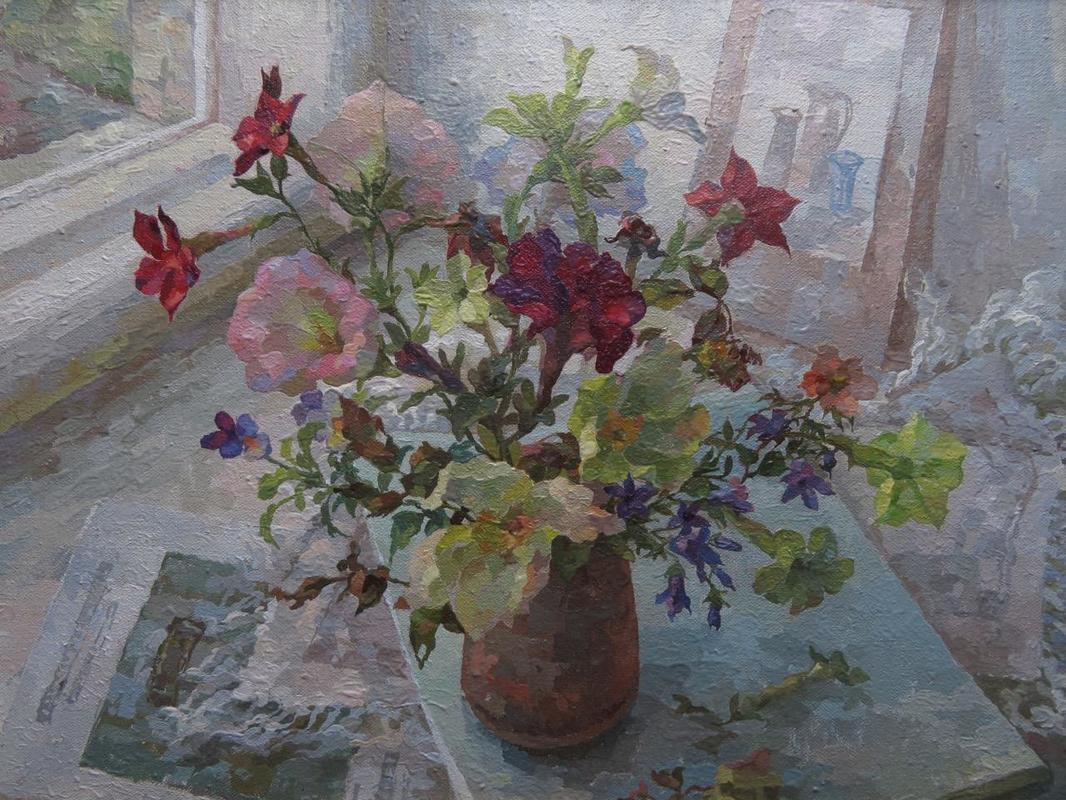 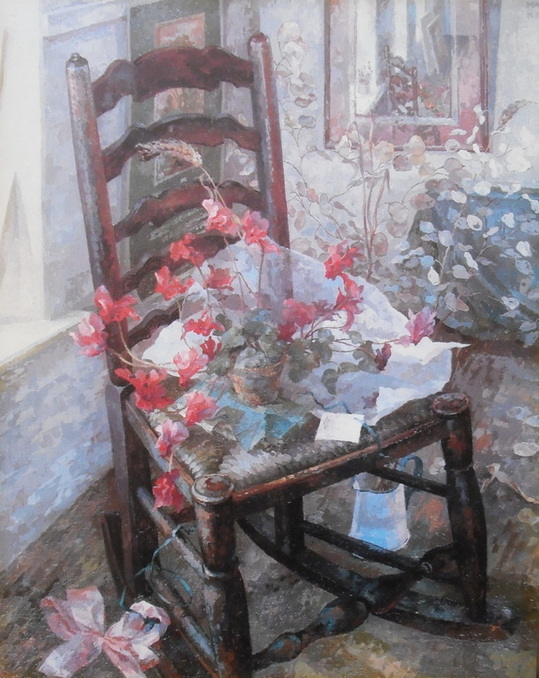 One of a series of still life paintings featuring either Ladder Back, or Spindle Back chairs. The very convincing solidity of the chair contrasts in nature with the delicacy and music of the flowers and tissue paper arranged on it's seat.  In this case it is a rocking chair. The ladder back and spindle back chairs were a type of chair often in use in farmhouses in Lancashire throughout the 19th century. The curve of the 'rocker' and the sense of perspective in the drawing of the chair is very well done. The dark, smoke stained legs of the chair are at variance with the warmer, polished timber of the chair back and 'ladder'. The curve of the rocker attached to the feet sweep forward with great virility and movement. The texture of the rush seat adds to the tactile quality.

On the chair a red Cyclamen, one of Mary's favourite houseplants. The now familiar tissue paper, along with the wrapping paper, ribbon and fallen bow become an integral part of the composition. Old friends indeed. It appears that the cyclamen has been on the chair for some time, and allowed to flower in it's own free, jazzy way, unrestricted by hands that might choose to order and control it's exuberance. The sense of health, and life and beauty conveyed by this plant is extraordinary. The actual painting of the plant is incredible. The understanding of the form, the control of the medium, and the sheer joy, life and freedom of every flower, stalk, and leaf, painted with such sensitivity and subtlety is beyond belief. Any one who has even tried to complete such a task will know how incredibly difficult it is to paint like this, and how very complicated it is to keep the painting under control. The result, in this case, seems so effortless. A lifetime of experience as a painter bearing rich fruit.

Not content with the complexity of this intricate houseplant, MKH adds a second still life. On the floor to the right of the rocking chair is an enamel jug (balancing the ribbon bow on the left of the chair) containing a bunch of dried honesty. These tall dried flowers reach up behind the activity on the chair. The dried seed heads flutter in the space between the main still life and the corner of the room. Again, the painting of these dried flowers is incredibly beautiful. Perhaps a little hard to appreciate fully from this reproduction, the painting of the honesty is perfectly subtle. Each dried leaf has it's own individuality and life. The pale, tissue like material of the actual dried leaves plays against the background of wall, mirror frame and a large object leaning against the studio wall covered with a piece of blue coloured material. The translucent leaves pick up the colours around them. Thus some reflect the red of the cyclamen, others are almost invisible against the white of the wall. Yet more reflect the pink of the mirror frame on the wall, whilst others hold the blue of the material covering the object leaning against the wall. This is classic MKH painting. She is fascinated by objects (in this case flowers and dried flowers) seen against various other surfaces such as tissue paper. It is the story not only of the subtlety of the main subject of the painting, it is also the subtlety of the story of the subjects relationships with other objects around it, and the light that rests for a fleeting moment on these elements and reveals their form.


This was painted in 1983, the last year of her life, and is believed to be her last major work. It is likely that the cyclamen depicted in the painting was given to her for her birthday, in late December 1982 and the lovely pot plant, one of her favourites had been allowed to grow and mature before being painted by her in the first month of 1983. The plant was clearly very happy in her sympathetic care, otherwise there surely would never have been such an abundance of joyous flowers, the pleasure of which Mary Kent Harrison has so successfully shared with whoever looks at this painting.